In June this year we had to make a difficult decision to take on a young deer. While out on my usual walks around the estate taking pictures of the Ospreys I was followed by a new born roe deer kid. I managed to increase my speed and loose it but still in site to see it settle down by a tree stump. It is so important not to touch them if you are ever in the same situation as once the human scent can be picked up on the youngster the mother will not return! The last time we had to take on a Roe was about 30 years ago so it is very rare that they need help! When returning to the tree stump the next morning he was still there lying flat, empty and listless. I can only imagine it may have been a weak twin or one of a set of triplets abandoned as it was very small. Now five months on it is nearly fully grown and is running wild again round the estate. If he spots us from the woods going on a walk he loves to come as well and has been enjoyed at close hand by many guests staying on the estate. I hope now over the winter he will travel further a field and will be consumed into his natural world! 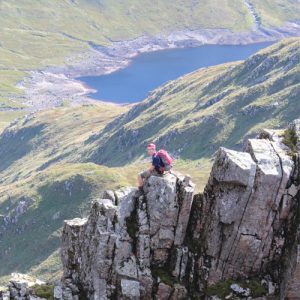 We climbed Ben Cruchan on Friday September18th. About an hours drive to the foot from the cottages.Well worth the climb with amazing views from the top of Ben Cruchan. We left from the railway station and went up through the woods and upto the left hand side of the dam. We left the resevoir on our right then up and up!! It took us 2 hours and 30 minutes to the top. Then we went round the horseshoe and back down the other side of the resevoir, then back down to the railway station where we left the car. The return journy taking in another Munro took about four hours. It is now Tuesday and I have only just started to unstiffen but it was worth every ache!! 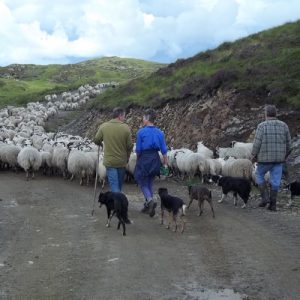 We are about 3/4 of the way through lambing with not too many problems!
Website: http://www.ederline.com

Finchairn Cottage is closed for three weeks while we put in a new walk in shower and a few other alterations. So you will now not have to step up into the shower any more!! While up there last night stripping beds I took a picture of the sunset with no filters added, as it was! We have had some amazing weather this september. 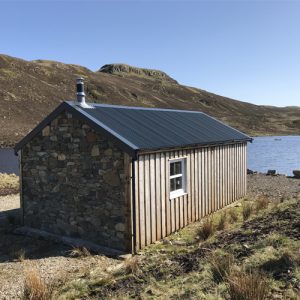 We are in the process of building a new boat house on Sandy Loch on Ederline Estate. This will have a little room to the back with a log burner and barbecue. An ideal location for holiday cottage guests to meet up for lunch when hill loch fishing for the wild brown trout.

We hope to have it completed by the beginning of August 2104.
Fishing flies and tackle can be bought locally at Fyne Tackle in Lochgilphead.
Website: http://www.fyne-tackle.com 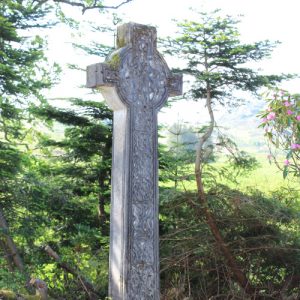 The remains of a medieval parish church on Ederline Estate, north of Kilmartin Glen, dedicated to St Columba, with an oratory close by stand in the churchyard which was still in use as a burial ground at the end of the 19th century.
Of fine workmanship, the church is longer than is usual in the area, with two doors on the south side. There is a damaged table-tomb north of the altar site and a piscina with a trefoil arch. A font, now erected at the west end, was found in three parts nearby. Inside, to the east of the nave door, is a sandstone block bearing a now almost invisible five-toed print with nails on three of the toes and which is referred to as ’the Devil’s hand’.
The church is said to have succeeded Killevin (NR 986 972) as the principal church of the Lordship of Glassary until, in the mid-16th century, the centre of the parish was moved to Kilmichael Glassary (NR 859 935). There is a tradition that the stones for the church were brought from Killevin and that no dressing was required, which suggests that the stones of Killevin church were re-used.
The name ’Kilneuair’ which is applied to the site (Kilnewir, 1394; Killenevir, 1490; Killenure, 1671) suggests an earlier church, and an older, roughly circular enclosure can be traced inside the churchyard wall, especially on the west and north.
Campbell and Sandeman (1964) translates ’Kilneuair’ as ’Coille-nan-Iubhair’, ie ’Yew Wood’ and suggests that this may be the Columbian site ’Cella Diuni’ mentioned by Adomnan, which was certainly in the Loch Awe area and has not hitherto been identified.
There are many carved stones in the churchyard, but no very early ones are obvious, although, near the gate, a millstone sunk in the grass may have served as a cross base.
A village once lay round the church and a market, called ’A’ Margadh Dubh’ – ’the Black Market’ – perhaps in contrast to the gaiety of Kilmichael Tryst, was held here. There are a few house ruins outside the graveyard.
New Statistical Account (NSA) 1845; Orig Paroch Scot 1854; M Campbell and M Sandeman 1964. 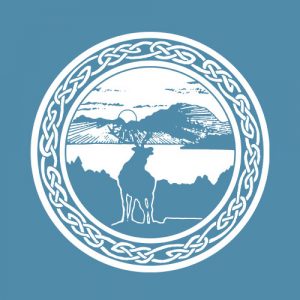 Mosi has been with us for four days now. She came from Katie Cropper at Shap in Cumbria. Both good working parents so I have no excuses! We will now have three in the team of Border Collies!

Training will start in 6 months time!!

The first osprey has arrived from Africa to Ederline today!! They have nested on Loch Ederline now for about 8 years with a good success rate. They have raised on average two young a year who have fledged and migrated back to Africa in the early autumn.
We are waiting for his mate to join him in the next few days. He will be busy nest repairing after all the winter storms. A wonderful site to see him back!
Website: http://www. 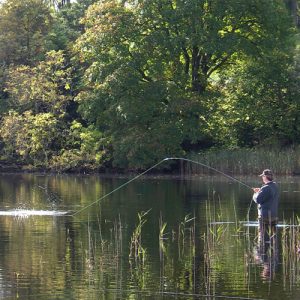 Ederline Estate is a fishermans paradise! We have 22 hill lochs with wild brown trout and three lower land lochs with pike, roach, perch and char.

We have rowing boats on some of the lochs and electric out boards can be used. We also have sit on top Kayaks. There is also a fishing shop in Lochgilphead which has everything you would need.

On Loch Ederline we have a pair of nesting Ospreys which arrive from Africa in the spring. There is an abundance of other wildlife which have been spotted regularly whilst guests fish. A wonderful place to unwind and fish in peace and tranquility.
Website: http://www.fyne-tackle.com 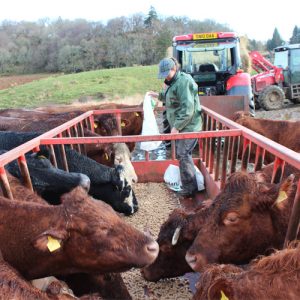 We sent our 90 cows away for the winter to Cambeltown at the bottom of the Mull of Kintyre.
They can make silage down there as the fields are flat. So it is easier for the cows to go to the food rather than the food come to the cows!
They arrived back last week and will all start calving any time!! Lots of early mornings and late nights.